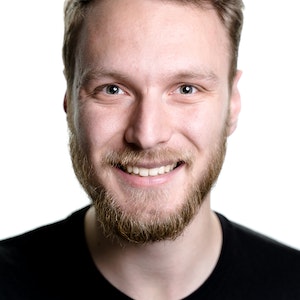 Alan Luntz is an experienced concert and event photographer who has served as a press and artist photographer at Millennium Park, Green Mill, Constellation, the Northwestern University Bienen School of Music, and the Jazz Showcase. During the day, he captures hundreds of smiles as a school portrait photographer and sports yearbook photographer for Visual Image Photography, a full service photography company with a 40 year history in the Chicagoland area. As a Northwestern University student, he has formal training in fine art film photography, developing, and printing. In his free time, Alan enjoys playing the sousaphone, guitar, piano, and meeting adorable dogs to photograph and post on Instagram.

Featured as one of the Best Photographers in Chicago
Book Alan L. now

My favorite reaction for any photo I have taken is actually for a school yearbook/ID photo; "Damn, I look FINE!" In photography, my primary objective is to take the photo that creates memories, and makes a client feel amazing about the way they look.

Timeliness is extremely important in photography, especially in the age of smart phones and social media. For the last student conducting recital I photographed, I was proud to be able to photograph an entire orchestra concert, select photographs, edit , and upload them to the client in time for them to post on social media the same night! This is so important when many other photographers will have week long turn around times for images.

"Very happy with my new headshots! If you’re looking for great pictures in the Evanston area, reach out to Alan Luntz. He takes great pictures at a reasonable price." - Eric S, Doctoral Conducting Assistant at Northwestern University

Shout out to Alan Luntz for getting this photos out so fast - he sent these and more to me just a few hours after the concert! I’ll be posting more of them later. If you need a photographer, go to him!! - Taichi F, Doctoral Conducting Assistant at Northwestern University

Thanks to Alan Luntz for taking these great pictures. Figures a fellow tuba player would have such good taste! - Roger M, Chicago Bandleader

I play tuba in a group called "Sousaphones Against Hate," which interrupts rallies by hate groups with the amazing sounds of tuba, sousaphone, and anyone else who chooses to join.